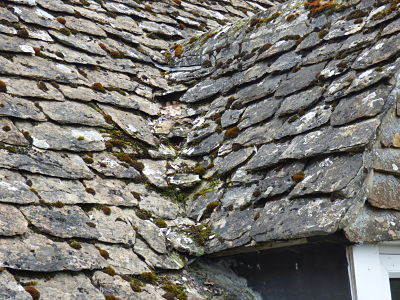 Stonesfield Slate is the name generally given to frost-split stone slates, originally produced near the village of Stonesfield in West Oxfordshire. Stone slating is one of the most expensive roofing materials and great skill is required to lay and repair the material. However, the slates offer a very attractive finish and with regular maintenance, a Cotswold stone roof can easily last 100 years, and some have lasted as long as 300 years.

The roofs are normally laid in diminishing courses with the largest and thickest slates (cussoms) laid in a double course at the eaves (the bottom of the roof). The next courses are laid with smaller slates (followers) with the smallest slates (short cocks) used towards the ridge (the top of the roof).

The slates were usually fixed with wooden pegs hung over the battens. the pegs were usually Oak driven through a hole near the top of the slate. Nails are now usually used.

The ridges (at the top of the roof) were usually made from a simple angled section of dressed stone. The traditional method of finishing the valley gutters (the inner angled joints between the roof slopes) is to form ´swept valleys´. These are shaped stones laid to a tight curve laid with alternating patterns of two and three slates across.

Stone slate roofs are very heavy and often the roofs are seen to sag slightly. This is not usually serious and has the benefit of allowing the slates to pack more closely together reducing the vulnerability of the coverings to snow and rain penetration.

Cotswold stone roofs should be kept reasonably free of moss and other debris that will hold moisture as this will increase frost damage and shorten the life of the coverings.