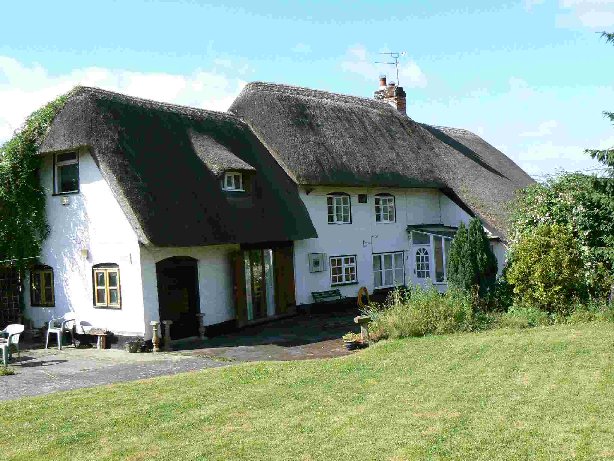 There are three main types of thatch:

This is the oldest style of thatching, with the straw laid haphazardly with the butt ends and ears of the straw laid randomly. This type of roof has a typical life expectancy of 15-20 years.

This is a more recent style of thatch, with only the butt ends of the straw exposed. This type of roof has a typical life expectancy of 25-30 years. Combed Wheat Reed is the most common roof type found in the Thames Valley Area.

This is water reed laid in a single coat. This type of roof has a typical life expectancy of 50-70 years.

The life expectancy of thatch depends on a number of factors, not least the quality of the work undertaken by the Thatcher, and the quality of the materials used. It also depends on the location of the building, whether it is in an exposed or sheltered position, whether it is near to trees, the pitch of the roof and exposure to prevailing winds and rain. An ideal thatched roof has a relatively steep pitch of at least 45 degrees, is in a sunny elevated position, with no trees too close.

Thatch is susceptible to damage by rodents, such as squirrels and rats. It is for this reason that roofs covered with long straw or combed wheat reed have protective wire netting (this is not required for the more durable water reed).

All thatched roofs have a separate ridge, usually formed in straw. There are two main types:

The wrap over ridge

This is where the straw is actually bent over the top of the roof and has a life of 10-15 years (this type of ridge can also be of flush or block-cut design.)

This is where the ridge is formed in two halves, and is laid so that the butts (bottom cut ends of the straw) meet at the very top. This more basic type of roof has a lesser life of 7-10 years. 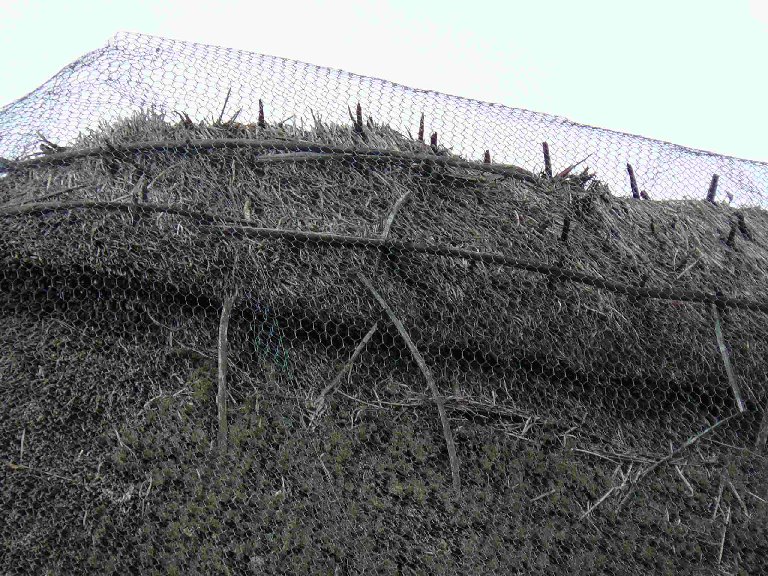 It is normal for some patching of the main coat to be undertaken towards the end of the life of the roof, during the last re-ridging. The wire mesh on long straw or combed wheat reed roofs is also replaced each time the roof is re-ridged, because the wire tends to rust and break where it is bent, particularly at the eaves.

When a roof requires re-thatching in long straw or combed wheat reed, the old rotten top layer is removed, until a firm dry base is found and a new coat is built up, as necessary. Therefore, it is rare with these two types of thatching for the entire thatch to be completely stripped down to the bare timbers. This is usually only necessary with a very neglected roof, or where timbers have deteriorated very badly and need to be replaced. Because of this, it is very common for the old underside of the thatch to be of long straw where the ears and butts of the straw are in both directions, whereas the outer coat is of the more durable combed wheat reed.

The material used in a combed wheat reed roof is straw, but the manner of fixing is similar to that of water reed. The straw is specially grown for thatching, the steams are comparatively long and the crop is relatively light, compared to modern commercial varieties. The straw must also be grown organically with no additional fertilisers, because these greatly reduce the strength and life expectancy of the raw material. The straw is also cut in a traditional manner, with a binder, ensuring that the ears are all at the top.

The straw is fixed to the roof so that only the butt ends are visible, in contrast to the long straw where a much greater length of the straw can be seen. Some local planning authorities encourage buildings to be re-thatched with the long straw method, but this is not popular with homeowners because, although it is cheaper, it does not last as long as combed wheat reed and the roof does not look as tidy. Some authorities also prefer a flush ridge to the more decorative raised block cut and patterned risk, which has been more popular in the last 30-40 years.

Water reed is less popular in the Thames Valley area, partly because it has not been readily available, but also because it is the most expensive thatching material, albeit the most durable. When a water reed roof requires re-thatching, the entire coat is usually stripped down to the timbers and a new coat is applied. This means that a roof covered with water reed is traditionally more angular in appearance, whereas a combed wheat reed roof has the more common softer rounded tea cosy look.

It is true that it is more expensive to insure a building with a thatched roof, but it is not always as expensive as one might expect. The perceived insurance risks are higher because the roofing material is more susceptible to damage by fire and partly because the material of the roof is more expensive than standard tiles or slates. An additional factor is that thatched buildings tend to be very old with period features, such as exposed beams and fireplaces, which would also be much more expensive to re-construct in the event of total loss, or even partial repair or re-building.

Houses with thatched roofs clearly have some financial disadvantages, but these are often outweighed by other advantages, such as the most attractive 'chocolate box' appearance of the building. There is also the attraction of living in a very old house with period features and the unquantifiable pleasure of living in a house which has stood for several hundred years, often in a pleasant village or semi-rural location.

Owners of thatched houses often report that they have a feeling of being part of history, and that they are not just owners of the house, but custodians of the building for future generations. The attraction of a thatched house has been recognised in recent years by developers with a few new-build thatched houses having been constructed in the area. Newly built thatched houses tend to have an additional lining laid over the structural timbers, beneath the thatch, very much in the same manner as a normal tiled roof. They also sometimes include additional fire protection measures, not normally found on old buildings.