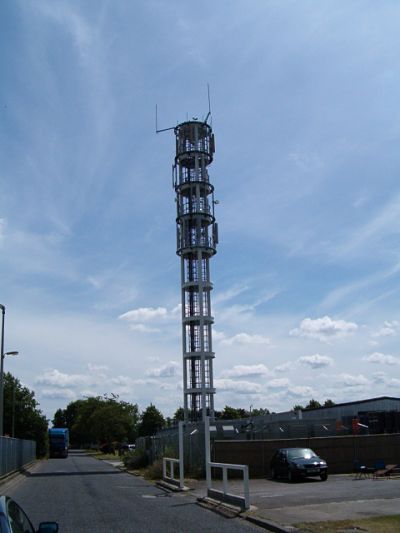 Mobile phone base stations are radio transmitters with antennas mounted on either free-standing masts or on buildings. Radio signals are fed through cables to the antennas and then launched as radio waves into the area, or cell, around the base station. A typical larger base station installation would consist of a plant room containing the electronic equipment as well as the mast with the antennas.

Several types of antennas are used for the transmissions: Panel-shaped sector antennas or pole-shaped omni antennas are used to communicate with mobile phones. Dish antennas form terminals for point to point microwave links that communicate with other base stations and link the network together. Sometimes the base stations are connected together with buried cables instead of microwave links.

Types of Base Station

There are many different types of base stations used by operators and it is not always easy to firmly categorise them as macrocell, microcell or pico cell. Categorisations tend to be based on the purpose of the site, rather than in terms of technical constraints such as radiated powers or antenna heights.

Macrocellular base stations provide the main infrastructure for a mobile phone network and their antennas tend to be mounted at sufficient height to give them a clear view over the surrounding geographical area. For this reason they tend to be obvious, particularly for the older sites with free-standing steel lattice towers.

Base stations in areas of low mobile phone usage may only have one transmitter connected to their antennas; hence, they will transmit only on one frequency. Base stations in busier areas may have up to 10 or more transmitters connected to their antennas allowing them to transmit on several frequencies at the same time, and to handle communications with many mobile phones. The power of each base station transmitter is set to a level that allows a mobile phone to be used within the area for which the base station is designed to provide coverage, but not outside the coverage area. Higher powers are needed to cover larger cells and also to cover cells with difficult ground terrain. Typical maximum powers for individual macro-cellular base station transmitters are around 5-10 W, although the total radiated power from an antenna could be up to around 100 W with multiple transmitters present. For a low capacity base station with only one transmitter, the radiated power does not vary over time, or with the number of phone users. Up to 7 phone calls can be handled simultaneously by such a base station.

The power from antennas used with macrocellular base stations is radiated in conical fan-shaped beams, which are essentially directed towards the horizon with a slight downward tilt. This is illustrated in the figure below and it causes the radio wave strengths below the antennas and at the base of masts to be very much lower than directly in front of the antennas at a similar distance. The beams from the antennas spread out with distance and tend to reach ground level at distances in the range 50-300 m from the antennas. The radio wave levels at these distances are much less than those directly in front of the antennas and can easily be calculated (see Section 5.1 of NRPB Report R321). At distances closer to the mast than where the main beam reaches ground level, exposure occurs due to weaker beams known as sidelobes whose power density is not so easy to calculate unless one has detailed technical information about the beam pattern from the antennas.

At positions where people are exposed to the radio waves from base station antennas, the level of exposure is much more constant over the whole body than when they are exposed to a mobile phone. Under these circumstances, the relevant basic restriction in the ICNIRP guidelines is that placed on SAR averaged over the entire body mass. ICNIRP specifies that this should not exceed 0.4 W kg -1 for workers or 0.08 W kg -1 for the general public. Whole-body SAR is not very easy to measure practically, consequently ICNIRP gives a reference level in terms of the power density below which the SAR restriction would be complied with. These reference levels vary with frequency and range from 2 W m -2 to 10 W m -2 for the general public over the radiofrequency range 10 MHz to 300 GHz. The reference level is 4.5 W m -2 in the 900 MHz GSM frequency band and 9 W m -2 in the GSM1800 frequency band. This is not because a lower limit is set for operators using the GSM900 band since the underpinning basic restriction is the same for both frequency bands. The different reference levels arise because the body tends to interact more strongly with radio waves at 900 MHz than at 1800 MHz meaning that a lower reference level has to be set. The reference level in the 2000 MHz 3G base station band is 10 W m -2. When considering exposure in the context of the ICNIRP guidelines, it is important to recognise that the guidelines are intended to limit total exposure to radio waves from all sources and not just that part of exposure arising from a particular base station.

There are various instruments available for making measurements of radio wave strengths and these vary in the degree of expert knowledge required to operate them and in their technical capabilities. Hand-held survey probes for measuring power density are the simplest equipment and they may be suitable for use by non-experts. Professional equipment of this type costs several thousand pounds, but it may be available for hire. The sensitivity of hand-held probes is limited. Probes containing sensors based on diodes tend to be able to measure power densities down to around 1 mW m -2, but also tend to over-estimate the average power density of base station signals. Probes containing sensors based on thermocouples give a true average power density reading but tend not to be able to measure below 100 mW m -2. Hand-held survey equipment tends to respond to a broad range of frequencies at the same time and it is not capable of tuning in to radio signals. For this reason it provides little insight into exposure situations where the source of the signal dominating the reading is not obvious. HPA Radiation Protection Division (RPD) carries out surveys of exposure levels in the environment around base stations using spectral monitoring equipment that can measure all of the radio signals present at a location separately. The equipment consists of a set of measuring antennas mounted on tripods that are connected in turn to a spectrum analyser which measures the signal strengths and passes the data to a computer for subsequent analysis.

Close to some base station antennas, the power density can exceed guideline levels. Operators calculate compliance distances in various directions from their antennas in order to define a boundary outside which the guidelines can never be exceeded. Preventative measures such as administrative procedures or physical barriers are implemented to ensure that people do not accidentally enter regions defined as exclusion zones. The design of sites would normally be such that the general public would not be able to stray into regions designed as exclusion zones. For large macrocellular base stations radiating up to 100 watts or more, exclusion zones in the range 10-15 m may be required in front of the antennas to ensure exposures remain within the ICNIRP guidelines for public exposure. In other directions such as below and behind the antennas, the exclusion zones would extend for lesser distances. Low power microcellular base stations radiating around 1-2 W would require much smaller exclusion zones than macrocells and it may be possible to fully encompass all regions where exposure could exceed guidelines within the plastic cover of the antenna.

The general public cannot normally approach regions designated as exclusion zones around base station antennas because the antennas tend to be mounted at the top of masts or on rooftops with controlled access. Typical locations where the public is exposed are at ground level, in buildings beneath antennas and in buildings facing antennas mounted on masts or other buildings. RPD has made many measurements of exposure levels at publicly accessible locations around macrocell base stations and in June 2000 NRPB Report R321 was published containing measurements taken at 118 locations from 17 different base station sites. Average exposures were found to be 0.002% of the ICNIRP public exposure guidelines and at no location was exposure found to exceed 0.2% of the guidelines. RPD made measurements over a broad frequency range of the radio spectrum in order examine the strength of the radio signals from transmitters other than mobile phone base stations, for example, those used for broadcast radio and television. The measurements also showed that signals from these less obvious, and more distant, transmitters can often exceed exposures produced by a visually more prominent transmitter such as a mobile phone base station.

In addition to the macrocell base station assessments, RPD has carried out measurements on a sample of low power, low antenna height, microcell and picocell base stations. The results show that power density levels are generally between 0.002% and 2% of the ICNIRP guideline reference values for the public at accessible locations within a few tens of metres of the antennas. NRPB-W62 Exposure of the General Public to Radio Waves near Microcell and Picocell Base Stations for Mobile Telecommunications Ofcom has put together a database of mobile phone base stations giving their location, operator and selected technical characteristics. The Sitefinder database is in the form of a clickable map. Subsequent to the publication of NRPB Report R321, and as part of the Government's response to the IEGMP report, Ofcom began an audit of the emissions from mobile phone base stations. Initially, 100 schools were visited during the year 2001 and a further 83 were visited during 2002. 27 hospitals were also visited during 2002. The measurements made by Ofcom and RPD show that exposure at publicly accessible locations near to base stations is very much below the ICNIRP guidelines.