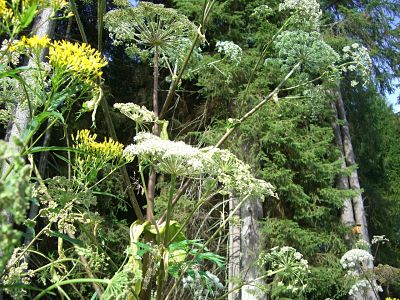 Giant Hogweed (Heracleum mantegazzianum) is one of the most invasive and dangerous of plants in Western Europe and the USA. It spreads rapidly and is extremely difficult to eliminate once it sets root. It is also very dangerous as its sap is highly caustic when exposed to sunlight, leaving severe burns that can have long-term effects such as scarring, rapid sun burning and chronic dermatitis. The plant has been identified as a public health hazard and laws prohibiting its growth and proliferation are in force in many countries.

Giant Hogweed is an enormous plant, growing to heights of up to six metres. It is a member of the Umbellifer family (carrot family) and a close cousin of common hogweed, which grows along most laneways and hedgerows in Britain and Ireland, particularly in southeast England and in parts of Scotland. It is a striking plant, recognisable by a long ribbed stalk, dark green highly lobed leaves and a flat umbrella-shaped head. It flourishes mainly in wet areas such as riverbanks, marshes and woodland.

The plant is a native of the Caucasus Mountains of southwest Asia. Like many invasive alien plants such as Japanese Knotweed and Himalayan Balsam, it was introduced into Britain in the 1800s by Victorian explorers who were impressed by its architectural beauty, but were blissfully unaware of the plant's rapacious nature. From the relative safety of estate gardens it escaped into water courses and waste ground where, devoid of any natural enemies, it grew into dense colonies. The Giant Hogweed propagates mainly through seed dispersal. It flowers between May and July, and its many seeds appear later in the summer. The seeds fall to the ground and can remain active in the soil for up to seven years. Disturbing or transporting the soil around it promotes infestation in new sites. During the summer, the plant's dense foliage is effective in preventing light reaching the ground beneath it. As a result, native vegetation can be killed off and this can lead to rapid soil erosion in affected areas.

The plant's leaves and stem produce a watery sap containing a chemical, which renders human skin highly sensitive to ultraviolet light. Touching the plant or brushing against it is enough to cause quite serious injury. When exposed to sunlight, the sap will cause painful blistering within a few hours of contact. The healing process can be slow, and your skin may remain sensitive to sunlight for the rest of your life. Contact can also produce permanent discolouration of the affected areas of skin and blindness can result from contact with the eyes. If any sap reaches your skin, you must wash it off immediately with soap and water while avoiding direct sunlight. You should also seek medical advice as quickly as possible.

Because of the tenacity of the seeds and root systems, the plant is very difficult to eradicate once it is established. Non-chemical control is possible; sheep and pigs are unaffected by the plant and will graze on it. The plant can also be cut under certain conditions, but it is very risky. If done incorrectly, cutting can encourage plant growth. Chemical control methods may be more effective. The weed killer glyphosphate will kill the plant after repeated applications (often over many years), but certain precautions must be followed, as it will also kill many other plants. In all cases, great care must be taken to avoid skin contact with the sap. Professional assistance is strongly advised. Plant cuttings are considered hazardous waste and stringent guidelines must be followed during the disposal process to avoid any problems.