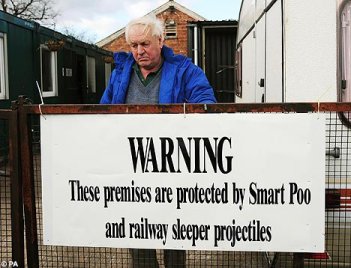 A tramp named Henry Hallowes was awarded title to a 3m piece of prime London land on Hampstead Heath after making a claim on the property based on the fact that he had squatted there for 20 years. Mr Hallowes victory, after three years of fighting eviction by property developers, vividly illustrates the legal reality that a person can acquire legal ownership of the land by being in possession of it for an extended period of time, provided he or she has the intention to possess the land throughout.

There is considerable case law establishing the meaning of possession and what counts as an intention to possess, with every case turning on its facts, but once dispossessed, the true owner cannot bring proceedings for its return. How long the claimant needs to have been in possession of the land depends both on whether the land is registered or not and when the claim arises. The Land Registration Act 2002, which came into force on 13th October 2003, reduced the period of possession required for a claim of adverse possession from 12 years to 10 years, but it also made it much more difficult to make a successful claim for adverse possession.

The old position, under the Land Registration Act 1925, still applies to all unregistered land, as well as to situations where a person can prove that he or she has been in possession of registered land for 12 years or more (with certain exceptions) prior to 13 October 2003. Anyone who can claim adverse possession under the old regime will want to do so, as there are fewer obstacles to a successful claim. This old regime was challenged in the case of Pye v UK, which arose from a claim by a Mr and Mrs Graham for adverse possession of land owned by a developer, Pye.

Facts of the Pye case:

Pye had allowed the Grahams to occupy part of its land under a grazing agreement. The agreement expired in 1983, but the Grahams continued to occupy the plot without permission. In 1997, the couple claimed adverse possession on the grounds that they has possessed it for more than 12 years. Pye contested the claim, but in 2000, the High Court found that the Grahams has enjoyed factual possession for more than 12 years and had the necessary intention to possess.

Having lost title to the land worth millions of pounds in development value, Pye appealed the decision. By this time, the European Convention on Human Rights had been given effect in English Law by the Human Rights Act 1998. One of the rights conferred by the convention is the right to peaceful enjoyment of possessions and Pye claimed in its appeal that the law of adverse possession was in breach of that right. The Court of Appeal overturned the High Court decision, finding that the Grahams did not have the necessary intention to possess, but also expressed the view that the law of adverse possession was not contrary to the Convention on Human Rights.

The Grahams appealed to the House of Lords, who upheld their claim for adverse possession. The Lords did not consider the human right issue, as the claim for adverse possession had arisen prior to the convention coming into force in the UK. They did, however, feel sufficiently concerned to comment that where a landowner has no immediate use for the land, but where he takes no steps to evict an adverse possessor, the loss of the land without payment of compensation is draconian and disproportionate, particularly in a climate of increasing awareness of human rights.

On that basis, Pye decided to take the matter to the European Court of Human Rights, arguing that the pre-2003 law of adverse possession contained insufficient safeguards to protect landowners from being deprived of their land and claimed that they should have been entitled to compensation for the loss of their property. The court agreed, by a narrow margin of four voted to three. But that wasn't the end of it In a rare move, the court gave the UK government leave of appeal to its appeal court, the Grand Chamber, which ruled recently, by 10 votes to 7 that the pre-2003 law of adverse possession is not in breach of the convention. The court did not dispute that the land lost by Pye would have been worth a substantial sum of money. However, it ruled that the 12-year time limit on landowners taking action to recover land was a legitimate measure intended to regulate and control the use of land. The court also noted that Pye could quite easily have defeated the Grahams claim at any time before the expiry of the 12 year period by demanding rent or seeking an order for possession. Five of the dissenting judges in this ruling, however, echoed earlier judgements, stating that the pre-2003 law was unjust and disproportionate. Nevertheless, this decision cannot now be appealed further. That will be a relief to government, who will not be required to pay out compensation.

A spanner in the works:

Beaulane Properties v Palmer Many adverse possession cases had been put in hold pending the Grand Chambers decision and it should now be possible to decide these purely on their facts, without any human rights concerns. Some uncertainty remains, however. While the Pye litigation was going on, an enterprising High Court judge decided to try and interpret the pre-2003 law in a way that was not incompatible with the convention. In Beaulane v Palmer, he held that, for a claim for adverse possession to succeed, the claimant had to show that possession of the land was inconsistent with any use or intended use of the land by the current owner. This would prevent a landowner losing title to someone he did not know was in occupation, or whom he was content to leave in occupation until possession of the land was needed.

Following the decision, the Land Registry adopted the test for claims for adverse possession which arose between 2 October 2000, when the convention came into force, and 13 October 2003, when the 2002 Act came into force. It has been confirmed that it will continue to follow this practices, as the Beaulane case has not been overturned. While this is true, this restrictive interpretation of adverse possession is no longer required and it is hoped that the Beauland decision will be overturned soon. Implications for landowners and developers It is now certain that registered landowners cannot claim a breach of their human rights or seek any compensation from the UK government. While the decision in Pye relates to registered land, it also seems unlikely that anyone who owns unregistered land will now try and claim a breach of their human rights if they are dispossessed by adverse possession. This is especially so because, in their original decision, the European Court of Human Rights acknowledged the undoubted relevance and importance of the law of adverse possession in relation to unregistered land. Many of the cases which were put on hold pending the Grand Chambers decision will now come back to life, although the decision may discourage some dispossessed landowners from taking the matter further.

Of course, landowners should be careful not to allow claims for adverse possession of their land to arise in the first place. Steps should be taken to take back possession from unauthorised occupiers as soon as possible. If occupation can be tolerated, it should be formalised and rent, or licence fee, demanded. To defeat claims under the new regime, always ensure that the Land Registry has an up-to-date address for serve of any notices and act upon any such notices promptly.