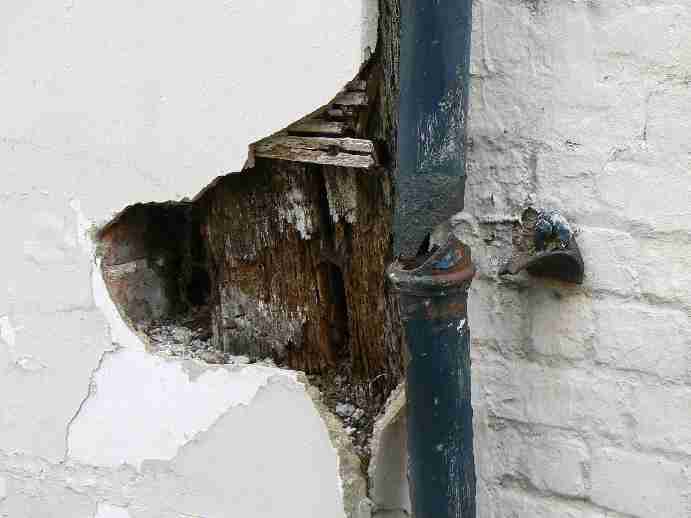 Timber-framing is sometimes dismissed as a liability but can prove remarkably durable, as shown by the survival of numerous examples many centuries old. When problems occur they are frequently down to poor maintenance or unsuitable alterations and fall into two main categories:

Decay from beetle or fungal attack due to dampness (as when protective render is removed, particularly from south-west-facing walls, or a cementitious rather than lime-based render is applied);

Distortion (for example, from overloading or the removal of frame members such as studs).

The construction and condition of a timber frame should be properly understood before attempting its repair. Assess as much as possible from a visual inspection supplemented by careful probing with a sharp tool. Closely inspect the joints because their soundness significantly influences the frameâ€™s overall integrity. More clues about the structural history of a timber frame (empty mortices, carpentersâ€™ marks etc) can often be found than with other construction forms. Where framing is concealed, non-destructive testing may be useful (for example, infrared thermography, microdrilling or fibre optic surveying). Never automatically remove plaster or panel infillings.

Timbers should not needlessly be replaced or distorted frames necessarily straightened. Where serious decay exists, a section of matching new timber can frequently be scarfed in. This should generally be â€˜greenâ€™ (unseasoned) but not freshly felled. Use fully-seasoned timber for complex repairs to carved work. Strengthening using steel may be justified where it allows more timber to be retained than would otherwise be possible. Use resins and consolidants only with great care. Ensure resins do not prevent pinned joints from moving. 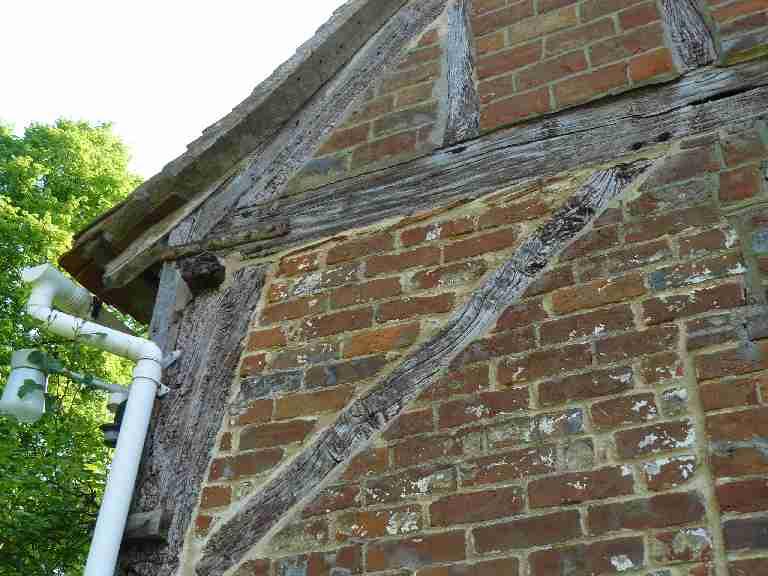 Cill plates are the horizontal bottom members of a timber frame that normally rest on masonry plinths. They can be subject to high moisture levels so are commonly the part of a frame most susceptible to decay. Partial or total renewal may be necessary, sometimes bolting together face-to-face more than one thickness of new timber. Occasionally, it can be acceptable to raise the plinth height to minimise future deterioration if other solutions are limited. When rebuilding a plinth and a damp-proof course (DPC) is felt justified, try not to place this under the cill plate but lower down in the masonry.

The feet of posts and studs sometimes decay, not infrequently with a cill plate that supports them. Rotten ends can be cut back and replaced with new timber scarfed on and held with pegs or stainless steel bolts. The new timber should be selected carefully to minimise twisting, particularly for narrower uprights. Where only tenons have rotted, false ones (slip tenons) can be inserted into sounds posts or studs.

Shakes (splits) in timbers are rarely of structural significance but may allow rainwater penetration externally. As with empty mortices or peg holes, they can be filled with timber inserts or, if their awkward shape prevents this, packed with well-haired lime mortar and limewashed. Internal shakes can be left unfilled but minimising fluctuations in temperature and humidity will help prevent them opening up. Timber inserts can also be pieced in when part of a timber face has rotted away. Concealed holes may be filled with adhesive mixed with sawdust.

New timber will soon blend in without tinting although limewash can be used to help unify the appearance if required, or cover old timber disfigured by small shakes, nail holes etc. The exception is where existing timbers are darkened, in which case the surface might be left or possibly re-blackened. Beeswax polish, rather than varnish, will often enhance the appearance of old, unpainted timbers internally, if required. Chemical strippers may remove unwanted black coatings. Avoid sandblasting.